Two people are dead, and four others are in the hospital after the car in which they were riding crashed on I-25 north of Las Cruces. New Mexico State Police say early Saturday a car carrying six people driven by a 17-year-old wrecked in the southbound lanes between Radium Springs and Las Cruces. A woman and child from Chaparral died at the scene after being ejected and the other four occupants including the teenage driver are still hospitalized. So far, investigators have determined alcohol was not a factor. 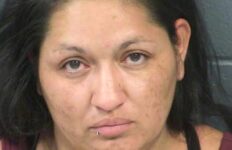